« Next Article: Costco in Seville

Tortilla, jamón and patatas bravas. When you think of Spanish food these are three typical dishes that come to mind. All over Spain eating well is not a very difficult task. In fact, Spain (a country more or less the size of California) consistently receives more Michelin stars than the entire US. So If you want to eat VERY well, then Spain is definitely a destination no gourmand can miss. For the food connoisseur there are many culinary possibilities to choose from especially in a place where regional specialties play an important role in what your menu will look like. But there is something more to Spanish cuisine, often born out of necessity, that goes beyond just regional cooking. In Spain, when an animal is used for cooking, the ENTIRE animal is used and there is very little waste. In Spain, questionable animal parts, which in American cooking would be used as an anonymous additive in some manufactured food dish, often have a starring role in some amazing dishes. Here are some examples of Spain’s sometimes strange food ingredients. 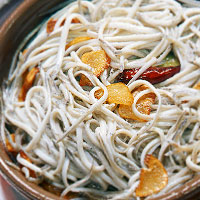 Angulas (Baby eel)
Definitely not a residual meat, this food is a delicacy all over Spain and, in the households that can afford it (not mine), this is a traditional Christmas dish. It is not uncommon around the holidays for this transparent baby eel, which weighs only 1 gram, to cost upwards of $500 a pound. Some of the most revered baby eels come from the San Sebastian, in northern Spain, and must be captured at night in an artisanal way using traditional tools and nets. The season usually lasts only a month and a half from the middle of November to the end of December. If you do order them, they will usually be sautéed in olive oil with lots of garlic. 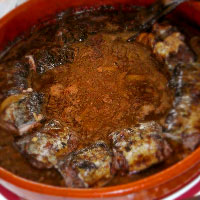 Lamprey served in its own blood
This seemingly pre-historic fish has been eaten with gusto since Roman times, if not earlier, and is highly appreciated--especially in Galicia. This fish is noted for its tough meat and its very unattractive appearance. In the village of Arbo, along the Miño River in Galicia, they still catch lampreys Roman Style. There, they make stone structures called pesqueiras along the river banks and with handcrafted nets they catch lampreys after they have swam upstream to spawn. Even though lamprey can be prepared in various ways, this way is probably the most recognized. The lamprey is prepared and served in a clay dish having been cooked with its blood, onions and wine. 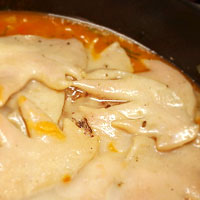 Stewed Cockscomb
From Zamora, Salamanca’s neighboring province, the cockscomb is a local specialty. This little known part of the chicken (rooster in this case) is not that common but there are a number of well known chefs that have incorporated this ingredient into their menus and by doing so have given this lowly piece of meat an air of respect. Often, it is prepared in a stew or cooked with rice, paella style. This gelatinous appendage is usually made with a rich and hearty sauce, perfect for the cold winter days in Castile and León. One thing to keep in mind too is that cockscomb has a high level of hyaluronic acid which is well known for its skin and arthritic healing properties. 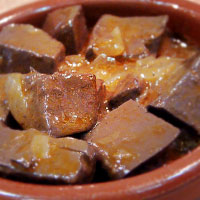 Sangre Frita (Fried Blood)
Blood is used in many dishes here in Spain. In fact the morcilla sausage that you’ll find all over is in fact a blood sausage. You will also find it in the regional dishes like the rice dish chanfaina, that’s so popular here in Salamanca. But sangre frita takes this to a whole new level since it is the primary ingredient and not just a bit player. This dish requires 4 pounds of coagulated pigs blood cut into cubes and cooked with onions, pine nuts and spices. Served with wine or beer and…you’re certain to be drinking a lot. 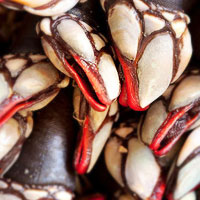 Goose Barnacles
Barnacles. Yes, you know those things that grow on rocks and piers. Once again, the Spanish are masters of making a delicacy out of something that you wouldn’t really consider eating. In fact people put their lives at risk to gather these little morsels along the rugged Galician coast. Since these barnacles are different from other types in that they feed with the movement of the water, they live along water line in especially difficult to reach spots. Like the angula, this product can see the price skyrocket, going as high as $200 a pound in the periods of most demand. Cooking these is actually very simple. Bring salt water to a boil, add the barnacles and return to a boil. When the water returns to a boil, take them out and start eating. For those that know, they say the intense sea flavor and chewy texture will make you a lover of this weird luxury food.


These are just five examples of some this odder food options you can come across here in Spain. To the casual tourist in Spain, Spanish food may seem as though there is little variety outside of beef filet and potatoes or chorizo and paella. By not challenging yourself, culinarily speaking, you will be doomed to eat paella and croquettes. You can avoid this if you look a little more closely; by doing so you will find a whole newle new world of food that places a premium on freshness and seasonality—and it doesn’t have to be anything strange either. Whether you go to a 4-star restaurant or a beachside chiringuito, don’t forget to try something that doesn’t look familiar. You may be pleasantly surprised.

« Next Article: Costco in Seville