Five Places in Spain You Need to Visit

Spain is renowned for its beautiful cities and beaches; indeed it has some of the most well-known cities in the world. While all of these places are worth a visit, Spain has much more to offer, with some smaller towns high up in the mountains or situated in beautiful countryside, and other unusual sites that are equally as attractive as the large metropolitan cities. Here are just a few of the most beautiful hidden gems to be found in Spain: 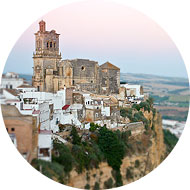 Located on the top of a sandstone ridge next to the Guadalete River, Arcos de la Frontera enjoys beautiful views across the landscape. It is the site of a large battle between the Moors and the Christians in the 13th Century, and there are still remnants of the battle today. La Iglesia de San Pedro enjoys a stunning position, perched on the top of a cliff and is particularly notable. This white-washed town is typical of Andalusia, and although off the tourist trail, it is well-worth a visit, but due to the narrow nature of the streets it is not recommended to take your car into the city! 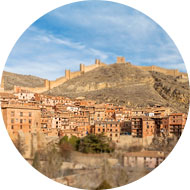 This town is very small, with only a few more than a thousand inhabitants. However, it really is special and is worth a visit if you can get there. It is situated in the hills of the Sierra de Albarracín, and as such is surrounded by hills giving it a unique backdrop. The buildings all have a red tinge to them thanks to the brickwork, and the town was named a National Monument in 1961. With hanging houses in the Plaza Mayor, this town’s architecture is really very special, with the Medieval walls climbing up over the hills, and towers with wonderful vantage points back over the city and across the landscape. 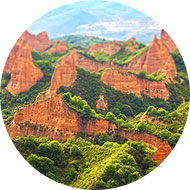 Previously the most famous Roman gold mine, Las Médulas is a truly beautiful and unique spectacle. It is a fine example of Roman mining techniques, and many of the aqueducts that were used to transport water into the rocks to blast gold remain today. With its red-gold rocks interspersed with lush greenery, the expanse of the Cultural Centre of Las Médulas was named a UNESCO World Heritage site in 1997. Excavation and research on Roman culture is still ongoing today, but there are frequent guided visits, as well as suggested hiking, driving and cycling routes around the site. 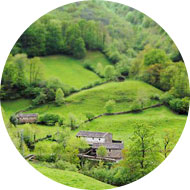 This area is hard to access, particularly if you do not have a car, but the valleys above the River Pas are another beautiful piece of Spanish culture. Previously a site for shepherds who would take their herds and flocks up the valleys in the warm season, the shepherds built stone houses; many of which remain standing today. In the winter they would move to long houses at the base of the hills, and these are now the sites of the three valley villages. The area is stunning with lush plants and beautiful views, and the remnants of the stone buildings that really portray the basic lifestyle that the shepherds lived many years ago. 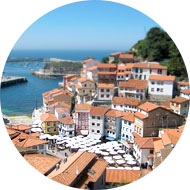 Allegedly founded by the Vikings, Cudillero is a small town that sits on the Camino de Santiago. The town is renowned for its fishing, and that is still its main economy today, although tourism is becoming a more prominent market. Cudillero is really beautiful as it seemingly drops straight into the water, and it is definitely worth a visit if you want to experience the charming way of life in a fishing town, as well as enjoy the delicious fresh fish served in numerous restaurants along the front.


Spain really is a beautiful country, with so much to offer. It is not all beaches and mountains, there are also caves and small Viking villages to be visited, that really give you something extra and make your trip to Spain that little bit more special. These sites may be a little harder to access, but they are most definitely worth going the extra mile for; and why not see what other hidden gems you can find along the way!